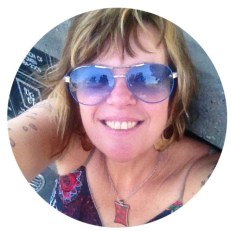 Lesley Buxton was born in Durham, England and came to Canada as a baby. Growing up, she lived in Ottawa, Edmonton, and Bonn, Germany. She studied acting at Mountview Theatre School in London, England, and has a MFA in Creative Nonfiction from the University of King’s College in Halifax, Nova Scotia.

Lesley is the author of One Strong Girl which, in 2018, won the inaugural Pottersfield Prize for Creative Non-fiction. She has worked as a writer in a number of capacities: as a playwright, a short fiction author, a newspaper columnist, and theatre critic.

She is the media director for Felt::Feutre Canada, a national not-for-profit organization for felt makers. She has written for international textile magazines such as Felt, Felt Matters and Filzfun. She is a regular contributor to Wine Trails magazine.

Her short stories and essays have appeared in a variety of journals including: The Antigonish Review, The Fiddlehead, The New Quarterly and Hazlitt. She writes a blog, Fall On Me, Dear about her life as a bereaved mother. In 2013, she was one of the eight spoken-word artists chosen to share their story at This Really Happened at the Montreal Writer’s Festival. Her essay, Are You Still Married, on marriage and bereavement, appeared in the anthology, Love Me True, published by Caitlin Press in 2018.

For many years, Lesley ran her own business, traveling around Ottawa and Western Quebec teaching theatre and creative writing to children, teens and adults.

She lives in Penticton, BC with her husband, Mark.

Lesley is available for speaking engagements on subjects that relate to arts instruction, to grief, and to writing & blogging. Please use the form below to let her know of your interests.